At the same time

Pop Choir Festival, that was launched two years ago for the very first time and became very popular, will also take place again this year – July 12, 2014 at Tartu Song Festival grounds. The choir and the best known Estonian soloists performed beloved songs from variety of Estonian pop and rock music repertoire. The difference between it and Song Festival is that the repertoire includes hits of Estonian music and the soloists are the most popular singers in Estonia. Participants are choirs from all over Estonia – mostly from Harju and Tartu County, in total there will be thousands of singers and dancers – 4 songs has DJ mix’s and choreography. 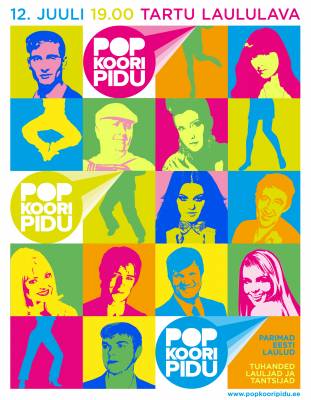 Tickets: Advance sale until July 11 in Piletilevi and Piletimaailm (12 €).
On July 12 and at Tartu Song Festival Grounds (15 €). Preschool children – free.

Welcome to the Pop Choir Festival!